Halloween is my favorite time of the year.  The nights are cooler and longer, for one thing.  Bugs have mostly packed it in for the winter.  Leaves are changing color if they haven’t gone all autumnal already.  Best of all, I get to leave off the theater makeup, cut the disguise spells, let my cloak be a cloak, and generally wander around with my bare face.

I don’t get to do that too much.  Usually, it’s only when I’m about to drink someone’s blood.  Rarely, I go full vampire on someone in an attempt to frighten them without killing them.  Seems to work, too.  I think it’s the tongue.

Come to think of it, why doesn’t Mary have a foot and a half of tongue.  Hybrid nature?  Age?  Lack of magical entities in her diet?  I’m still not sure why I have a tongue that long.  I’m not sure it’s natural.

Even on Halloween, I don’t show off the tongue.  Explaining it as a prosthetic tongue and part of my costume doesn’t work too well.  It gets me a lot of unwanted attention.  Although some of the attention isn’t hostile at all—more appraising and interested, if you catch my drift.

But I do love me some Halloween.  I always get compliments on my costume.  Someday, I may get tired of the vampire schtick, but I doubt it.  It’s nice to smile with a mouthful of teeth and not cause a generalized panic.

So I was enjoying the season on an alternate Earth—there are lots of them; it’s always Halloween somewhere—in what I have to characterize as a mid-21st century America.  I think it was Cincinnati, but it might have been Cleveland.  It began with a “C” and it was in Ohio.  I think.  I get a little fuzzy on geography when I travel by gate.  I’m pretty sure it was Ohio. 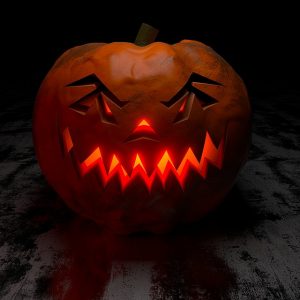 The venue was a farm.  Whatever they harvested, it was already gone.  Instead, there was a whole crop of pop stars, historical figures, television personalities, mythical beings, and monsters, all gyrating around a bonfire, in between smaller campfires, and generally drinking, whooping it up, and having a fantastic time.

Not all the monsters were costumes, I noticed.  It seems I’m not the only one who takes advantage of the Halloween spirit.  I didn’t meet a werewolf, but I smelled him.  He wasn’t in beast form, more of a Lon Chaney wolfman.  He looked at me across a small fire and I met his gaze.  The way our eyes reacted to the light was another tip-off for each of us.  I nodded and gave him a very slight bow.  He cocked his head, like a dog, thought about it for a few seconds, then nodded back and raised his beer.

No vampire-vs-werewolf fight tonight.  I was immensely pleased; I wasn’t wearing a sword.  Firebrand was hanging around with Bob and the Saber of Sharpness doesn’t look right with the medieval vampire outfit.

I really wanted to go ask him some questions.  I’d never met a werewolf before.  Technically, I suppose I still haven’t.  On the other hand, he was drinking, his date was on his arm—Cleopatra, I think, holding a leash on her pet—and he seemed to be having a good time.  Why risk spoiling it?

He was one of the more powerful spirits in flesh I’ve seen, though.  Important note to self: the vitality of shapeshifters may be higher than that of humans.

I held on to my red, plastic cup for camouflage as I circulated, lightly snacking on the vitality around me.  It’s like walking through an ice cream shop and getting a sample of each flavor.  It’s hardly noticeable from any given source, but by the end of the line, it adds up.

I ducked a couple of party planners who wanted me in the costume contest.  I refused as politely as I could.  On the other hand, I wasn’t likely to be back on this random alternate Earth anytime soon; I was happy to let people take pictures with me.  Like film cameras, digital cameras don’t do so well at capturing my image.  I tested it a bit, once.  Film doesn’t record anything, just blankness.  Digital is almost as bad, but there’s an area of visual distortion where I should be.  To the people who wanted selfies with the vampire, I explained it as a techno-gimmick that interfered with the phone’s camera.

“After all, you can’t record a vampire’s image, remember?”

Each of them nodded and went “Oh, yeah…” and that was the end of it.  God bless Jack, Jameson, and Tito’s.

Aside from the live music, dancing, and general party atmosphere, there were a few actual events on for the night.  The costume contest, of course.  There was also a stage adaptation of “The Nightmare Before Christmas,” put on by the local community theater people.  Sally was amazingly sexy—too sexy for the part, I thought, even in the rag-doll dress.  When she sang, I understood why she was cast.  Fantastic voice, absolutely fantastic.  She needed a spot on some discover-the-talent show, pronto.

I was highly amused at the role-players’ area, where everyone was in character, not simply dressed for the part.  They actually roped it off with “Caution” tape and posted signs.  Smart.  It’s interesting to listen to a mummy and Frankenstein’s Monster (“Call me Frank.”) chatting about how hard it is to be terrifying in the modern world.  I had to stand there with them and make sympathetic noises.  They raised some good points, I must admit.  Role-players can really get into character.

I was less amused by the Dark Wizard, the Necromancer, a Red Wizard of Thay, and a couple of Cowled Wizards using their sticks to draw a large diagram in the field.  The Dark Wizard was coordinating them and they were pretty serious about it.  They had a stake in the center and a string to help make the circle, a couple of modern (although quite ancient-looking) books—probably from Etsy is my guess—with handwritten pages, all that stuff.

It’s not that I don’t appreciate them being in character.  There was nothing wrong with that.  What bothered me was the spell.  It looked and sounded like an actual spell.  It was hard to get a good look at it; there were people moving around and it was big, laid out flat on the ground.  I needed a ladder, at the very least, to take in the whole thing.  Still, I did what I could.  I worked my way around the perimeter, eyeballing it.  It was definitely a summoning, albeit a fairly generic one.  In this piddly-poor magical environment, it was unlikely to do anything.

The Dark Wizard opened up his traveling component case.  It probably started life as a large tackle box, but with a little vinyl to simulate leather, some brass tacks, a hot glue gun, and a bit of imagination, it became a Dark Wizard’s case.  He pulled out a stoppered vial and poured out the contents in the groove of one of the inner circles.

I smelled blood.  Chicken, mostly, along with some cat blood.  Trust me on this.  If I’ve smelled a kind of blood, I never forget it.  My nose doesn’t, anyway.  I may not recognize your perfume, but I can tell you how many rats died in a wood chipper just by smelling it.

The power from the blood spread through the diagram as the other wizards moved to their circles.  With them out of the way, I had a much better look at the diagram as a whole.  The Dark Wizard stood in what is traditionally known as the Conjuror’s Circle, a small, one-man spot of heavily-reinforced protections.  It’s the control room, the bridge of the ship, where he does all the work of guiding the spell, containing the summoned entity, bargaining with it, and/or dismissing it.  If it gets loose, he’s still in his warded little area, able to cast further spells or just wait until it finishes tearing up his lab and goes away.

The other circles weren’t Conjuror’s Circles.  Their place in the diagram, the way they were connected, told me they were sacrifices, sources of power, disposable batteries for the spell.

In retrospect, I suppose it is barely possible those lesser circles were only there so the cooperative, group effort in casting the spell could be shared among them all.  I didn’t see anything like the usual safety features, however—say, the limiting function to keep the spell from sucking the soul straight out of a very surprised, unwitting dupe.  I suppose I could have missed it.  On all the circles.  Even when I looked for them.  Maybe.

When the Dark Wizard started his chant, his fellow role-players—okay, his coven—joined in.  I did not appreciate the way they invoked Lucifer directly.  I’m not a demonologist.  I’m not a devil-ologist.  But I do know the rule: Never invoke anything bigger than your head.

Rimshot.  Laughter.  But it’s not meant to be funny.

A more serious take on that same rule:  Do not call up what you cannot put down.

Okay, real power is moving through the diagram.  The ritual chanters are putting on a good show.  People are laughing and applauding and, all unwittingly, adding some urgency to the spell.  If everyone inside the diagram—aside from the Dark Wizard, of course—suddenly falls down dead to feed the spell…

You know, it might actually work?  That is, the spell might go off.  Whether Lucifer himself showed up or not, the spell might function, and that’s not a good thing.  In fact, even if some other devilish entity arrived to see who rang the doorbell to Hell, it wouldn’t be a good thing.  I might even go so far as to say it would be a profoundly bad thing.

Without making a production of it, I reached inside the circle with my tendrils—it’s meant to contain, not keep out—and traced a couple of lines in the spell diagram.  Nothing too terrible, from a spellcasting standpoint.  Just a couple of short circuits.  Energy drawn from the helpers would be rerouted, fed into the other helpers, rather than being drawn into the spell itself.  Sort of a small subsystem of energy transfer, contained within and isolated from the larger system.  It didn’t interfere with the spell, as such, aside from disconnecting the boosters.  Dark Wizard had the spell all to himself, basically.

Gradually, interest in the proceedings waned.  People wandered off to find more entertaining things, since this performance was clearly not going anywhere.  No pyrotechnic finish, not even a good plot, just a lot of “Hail Satan!” and so on.  Eh.  Well, all the weirdos come out on Halloween…

I, on the other hand, simply stood by, watching and waiting as they worked themselves to exhaustion.  I was more than a little interested in finding out if the lesser wizards were in it knowingly and voluntarily, or if the Dark Wizard was casting a bunch of theater junkies as unwitting sacrifices…

← Christmas is a Long Night This Army →