All the normal rules of chess apply, except where altered below.  Pieces move the same ways, capturing pieces involves entering their square, and so on.

Every piece should be represented by an individual combatant.

When a piece attempts to move into the square of an enemy piece, the board is cleared and the two combatants fight.  The winner keeps the square and the individual pieces return to their previous positions.

The objective of the game is therefore no longer to capture the King, but to kill the King.  Placing the King in check still requires immediate effort to get the King out of check, but failing in the attempt only allows the attacking piece to enter combat with the King—it does not guarantee victory.  The King can defend himself like any other piece.

Moves must be declared by the combatant playing the King.

Combatants playing pawns fight normally and cannot be defended by their patron piece.

Pawns that reach the far side of the board may be exchanged for previously captured pieces.  (With the exception of pieces killed by the enemy King.  See “King”)

In the event of a shortage of combatants, pawns may be replaced by markers.

Any attempt to capture a

This bypasses the usual rules for movement and en passant attacks.

A patron piece is not required to defend the pawn marker.  An undefended pawn marker loses to any attacking piece, including other pawn markers.

Bishops move and fight normally, but, during their movement, may not be attacked by any piece.

If a bishop is victorious over an enemy piece, the bishop has the option of immediately engaging the same piece in a second battle.  If the Bishop is victorious, the defeated piece becomes a converted piece.  This piece joins the side of the Bishop and is placed on the Bishop’s starting square. (KB1 or QB1)  If the square is occupied by any other piece, the converted piece is considered captured, instead of converted.

If the bishop is captured, all pieces converted by that bishop immediately revert to their original side, retaining their current position on the board.

Bishops may be converted.

Any piece moving within or through the squares immediately surrounding a knight, if moving more than one square, may be attacked “en passant” by the knight during their movement.  This does NOT count as a move by the side to whom the knight belongs.

If the moving piece wins, it continues to its original target square and the defeated knight is removed from the board.

If the moving piece loses, the knight occupies the square normally and the defeated piece is removed from the board.

If more than one knight can attack the moving piece in the course of its movement, combats are resolved in sequence, not simultaneously, even if the “attacked” square is eligible for attacks from both knights.

It is not required to attack a moving piece.

Bishops are immune to the “en passant” attack of knights.  They always arrive in their target square unchallenged. 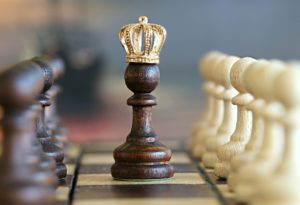 As the fortresses of the board, Rooks may not be attacked unless they have just completed a move.  For example, if White moves a rook to KR1, Black’s next move must be to attack the Rook.  If Black does not attack with its next move, the Rook has “fortified” its position and is immune to attack until it is moved again.

Rooks that have successfully “fortified” their position may only be attacked by the enemy Queen.  The enemy Queen may attack a Rook at any time, but may only do so personally, not by proxy.  (See: The Queen)

If a King is successfully attacked but proves victorious in battle, the defeated piece is removed permanently from play and may not be recalled.

After a personal victory, the victorious King may immediately call forth any previously-captured piece (of his own side) to be returned to the board.  (With the exception of any pieces defeated by the enemy King.)

Queens are the manipulators and diplomats of the chessboard.  Any time a Queen attacks or is attacked, she may summon any other allied piece to do battle on her behalf.  If the summoned piece is victorious, it returns to its original place after the battle and the Queen occupies the challenged square.  If the summoned piece is defeated, it is considered captured and removed from the board, while the Queen returns to her starting square (Q1).

*Special:  If the Queen is forced to return to her starting position and the square is occupied by an enemy piece, the Queen immediately faces combat without proxy.  She battles on her own, with the normal combat results.

If the Queen’s square is occupied by an allied piece, either the allied piece or the Queen must be discarded as though captured.  The King may choose which of the two pieces is discarded.