Welcome to the 2nd issue of “The Chronicle”, Garon Whited’s new monthly newsletter. This month Garon has news for everyone who has been waiting for it. So we will keep this short so you can read the words straight from his mouth, er, pen, or is it computer keyboard? You can follow Garon on Facebook and catch Garon’s tweets here. 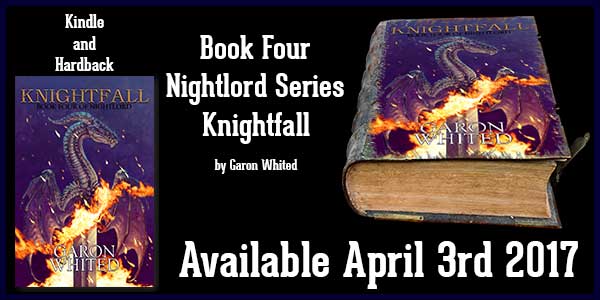 Hello again! If you haven’t heard from me before, it’s either because you’re new to “Nightlord” or because I’ve been writing books instead of, you know, socializing.

Sorry about that. It’s hard to have a conversation with people, sometimes, especially when I’m arguing with voices in my head. And sometimes it’s hard to tell the difference.

Good news! I’m almost done (as in, “Here, you can read it now.”) with Book Four of the “Nightlord” series, “Knightfall”! You may recall the third book, “Orb,” ended on a bit of a cliffhanger. “Knightfall” picks up right after, so you haven’t missed anything. Ten points to House Bloodsucker for a successful, if somewhat poorly-executed escape!

And, if you’re interested, Johann does <spoiler censored>. So there’s that.

Right at this moment, I’m going through “Knightfall” again, doing the final checks, edits, and proofreading. Naturally, some typos will escape my bleary-eyed, over-caffeinated gaze; please bear with me in your usual patient and understanding manner. I expect to spend the last week and attached weekends doing this, but I thought I should let you know where we stand, schedule-wise. 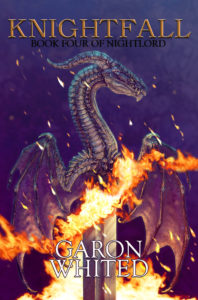 April 3rd. That’s when I expect the Kindle edition and the hardcopy edition to go live.

As for the Audiobook version, that takes a little longer. Sean Runnette does a fantastic job, but he can’t start until I finish! And he has to read the whole thing—these are not small books! From what I understand of his schedule, we’re looking at a very tentative audiobook format coming out in—brace yourselves—June. [ducks for cover]

On the plus side, at least the reading material is available. And, while Sean is working on the “Knightfall” audio, I’ll be diverting slightly to finish a side project. If you haven’t read the short story “Dragonhunt,” I suggest it. It’s really chapter two of a dragon-hunting novel that should come out about the same time the audio for “Knightfall” does. We’ll see how it goes.

(Eric has a bit of a cameo in the dragon-hunting book, just so you know.)

Then it’ll be back to the “Nightlord” series and two more books of Eric. Working titles are “Good God, Why Did I Start A Series?” and “This Last One Is Going To Drive Me Slowly Bonkers.” (The titles will probably change between now and actually releasing them.)

Six books, total. And I promise to be just a trifle faster than some writers who seem to enjoy taking their sweet time about finishing a series… but I shan’t mention any names, by George, no matter who they R!

May your monster under the bed be friendly!

Give or take a few hours depending on how fast Amazon lists it on their site.