Nightlord: Sunset (Nightlord book 1) by Garon Whited is the first installment of a three part series and an exciting fantasy quest. The kindle version is 680 pages that are filled with adventure, action, magic, and comedy. The novel lights the fire of imagination and engages curiosity.

After finding himself dumped by his fiancée, broken-hearted Eric drowns his sorrow in alcohol. He wakes up the next morning in a beautiful stranger’s bed and feels different… He slowly learns that he has been changed into a vampire without his consent and worse has inherited enemies called the Church of Light from a different dimension. When someone close to him is murdered, Eric seeks revenge on the Church of Light and accidently opens a magical portal to their world. Once there, Eric’s natural abilities to wield magic and general knowledge of the land grow quickly. He is aided by new friends, a golem horse called Bronze, and a sword called Firebrand. Eric fights a dragon, battles armies, and eventually confronts the Church of Light. Can Eric get revenge without losing himself in the process? 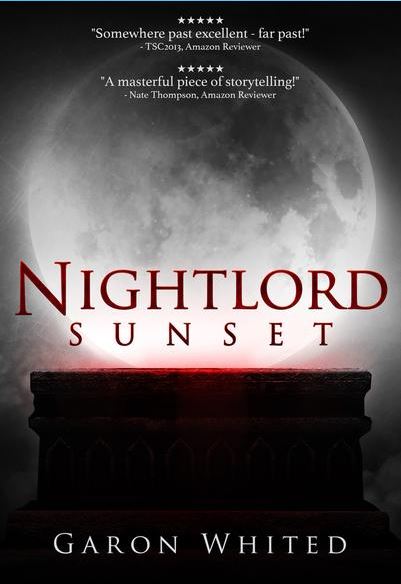 The epic saga, told through journal entries (dated with the familiar Gregorian calendar) uses first person point of view; the storytelling technique was highly successful and engaging. The main character, Eric, remained amusing, inquisitive, charming and self-deprecating. He begins as an everyman and becomes a hero through various quests and deeds. The character development was impressive. Every character encountered existed for a reason and felt authentic to the story. The dialogue flowed well, was witty, and served to explain details about the new land. The world building was fantastic. There are multiple cultures, religions, creatures, and languages. The land is ruled by a king and is heavily influenced by the Church of Light. The details about the foreign land were handled superbly by using relatable examples from our world to understand what Eric was experiencing. The made up languages are used sparingly and do not slow down the story. Whited provides unique and funny descriptions to explain how Eric responded to the new world.

Vampires in this book are not possessed by demons or sex symbols. They are similar to Grim Reapers or Valkyries who ease the dying into death and consume their life spark. During the day Eric is technically alive with a beating heart and a need to breath, but at night he dies and walks around as a powerful animated corpse. He does need blood and food to survive. This was a fresh take on vampires and brings interesting identity issues and a crisis of conscience.

Whited has written an epic adventure that is well thought-out and captivating. The story was a perfect blend of fantasy and reality that made it feel authentic and true; it was thought-provoking, funny, with a good balance of action and self-reflection. The major themes are identity, morality, advancement of society, dangers of new weapons and technology, education, and freedom.

There was very little to criticize about this book. Eric explain too often that he does not like anything that alters thoughts or “messes” with someone’s mind, proper nouns are not capitalized consistently, and a few words were placed incorrectly. Otherwise this was a very polished and well-written novel.

I rate this book 4 out of 4 stars. It is easily one of the best books I have read this year. The book was so rich I felt like I could read it multiple times and get something different from it each time. There are unique and interesting ideas about magic, science, vampires, religion, and medicine. The strongest message I took from the book was not allowing what you are to define who you are. If you enjoy epic adventure fantasy then this is the book for you.

This review was published on OnlineBookClub